When you’re shopping for groceries, do you go straight to the name-brand items, or do you try to save money by selecting Great Value products instead. Generic foods and other grocery items are just as good as those expensive name brands, so why is it that we pay for the brand and not the item? If you think about it, there are many companies that raise their prices just because they can. The same concept applies in the firearm industry. Why pay more for a Heckler & Koch firearm when instead you can get a HK Clone for about half the price?

Truth be told, Heckler & Koch can justify why their pricing is always so high for their legendary line of guns. They put their guns through torture testing, they pay attention to detail, they fit and finish each one individually, and they make sure all guns put out on the market are of high quality.

But, what if I told you there’s HK clones out there that do all the above, and compete against the firearm giant by cutting the prices in half? If you’re looking for a great firearm, take a look at some comparisons between some big shot weaponry.

Each BPP23E comes with some standard features. It has a 17.7” barrel that is easily interchangeable. It has the same style carrying handle as a HK21E/23E. There’s a S.E.F Semi-Auto Trigger Group. It comes with its own feed mechanism and bolt carrier, as well as a forward assist. On the upside, it has a 1200 meter rear sight.

What’s the big difference between the BPP23E and HK23E? The BPP23E is a little more than half that price. That’s savings to smile about when you fire an entire belt of ammo down at the range.

Considered the most popular submachine gun, the MP5 reigns above the likes of its brothers the MP7 and UMP. It’s known for its reliability, easy to use in close quarter firefights, and high precision and accuracy.

So how is the BPP94 even better? Other than the fact it has the finest upper receiver on the market, has a semi-automatic delayed blowback, and has a F-Style Bolt Carrier Group, it’s as little as $1995!

The HK11 originally was designed like a G3, only designed to have a heavier barrel to fit the role of a light machine gun. It is the first machine gun to be produced by HK and were one of the first to feature a S.E.F trigger group. The best part about the HK11/BPP11 is its ability to change out a belt-feed mechanism with a magazine for more conventional firing.

The BPP11 is modeled very similarly to the HK11, to the point there’s little to no difference in appearance. The BP11 comes with a standard HK rear sight, a 17.75” interchangeable barrel, a 20 round magazine, and a E-Style charging handle, cocking tube support, carrying handle, bolt carrier, and shroud with all the correct attachments. It’s also only $4295, a little more than half the cost of a HK11 on the market. 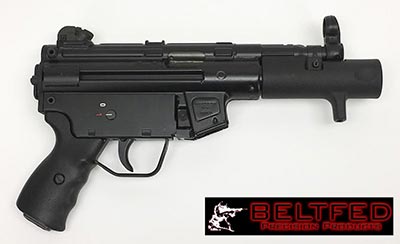